For those who are familiar with Evernote or Yinxiang Biji, they know that the brand’s logo is the head of an elephant. In fact, the reason Yinxiang Biji uses an elephant as the brand's logo is to borrow the American saying "an elephant never forgets", to convey its founding ideas and concept-as the extension of human memory, whether it's personal memory or collective memory, memory can be concretized and tangible, as a result, it can help preserve human civilization, and if mankind loses its memory, the whole culture will vanish.

From 2008 to 2018, Evernote has been accompanying users around the world for more than ten years, helping people to store the rational or emotional memory. In 2018，Evernote announced that its former Independent brand for China, known as “Yinxiang Biji”, completed the reorganisation and became an independent Sino-US joint venture. They’re delighted to see that more and more people are joining them and becoming more emotionally dependent on Yinxiang Biji.

As a company closely associated with elephants, Yinxiang Biji has also been practising the social responsibility of protecting elephants in its own way. As early as the fourth-anniversary party of Yinxiang Biji, they donated funds and helped ten baby elephants from a Kenyan elephant orphanage. Yinxiang Biji believes that the retention of memory is also a continuation of love. 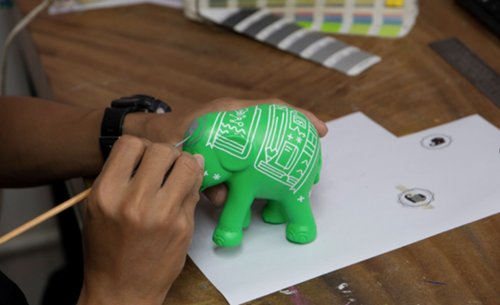 Yinxiang Biji 's partnership with Elephant Parade is also carried out on the basis of the common goal of "protecting elephants and maintaining ecological balance". For the sixth-anniversary party of Yinxiang Biji, "Yinxiang Biji x Elephant Parade" limited-edition painted elephant sculpture made their wonderful debut. With their vigorous strides forward posture, the baby elephants perfectly demonstrate the Yinxiang Biji under development and its determination and confidence to move forward. And on the back of the elephant sculptures, the patterns range from rope to the oracle, from the bamboo slip to paper, from the computer to the multi-terminal cloud service. It's also the display of changing recording tools in China's 5,000 years of history of the development, offering the audience a review of the development of the times and the precious moments in the progress of human civilization. As one of the highlights at the party, the elephants' wall left a deep impression on those present.