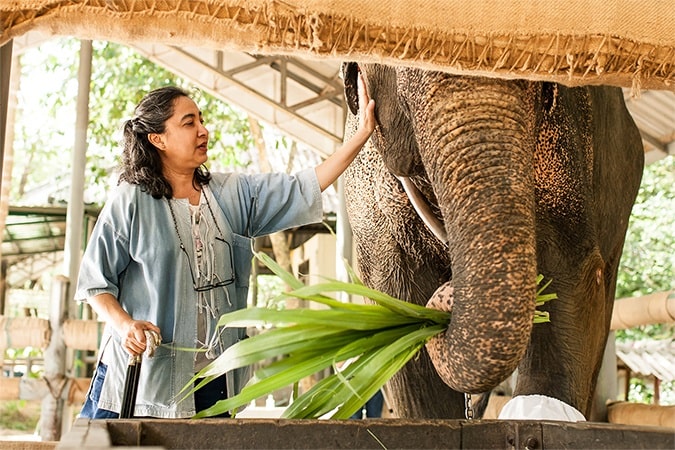 HOW YOU CAN HELP?

Make a donation to help save one of nature’s most magnificent creature’s.

The Asian elephant are an endangered species and desperately need our help. Human-elephant conflict, loss of natural habitat, poaching and capture are the biggest issues threatening elephants. There are less than 50,000 Asian elephants left. In the last 100 years, their habitat has shrunk by 95% and their population has declined by 90%. Known as the "gardeners of the earth", many plants and animals depend on elephants for their own lives. If elephants disappeared, many other species would too. The elephant will become extinct if we do not do something right now. Elephant Parade is committed to raising funds to make a difference and to help save elephants.

Be part of it.

FRIENDS OF THE ASIAN ELEPHANT HOSPITAL

Friends of the Asian Elephant (FAE), nurtures elephants that have been injured by stepping on landmines, involved in traffic accidents, have fallen sick or have been abused by humans. All elephants brought to the hospital are treated entirely by funds donated to the foundation. Since its inception in 1993 FAE has treated over 4,000 cases at the hospital as well as through its Mobile Vets Project, which provides medical needs when elephants are unable to travel to the hospital. The hospital sees over a dozen outpatients per month, but is also the permanent home to five residents, including Mosha, the world’s first elephant to have been fitted with a prosthetic leg and the inspiration behind Elephant Parade. Elephant Parade has pledged to support Friends of the Asian Elephants for the duration of Mosha’s hopefully long, healthy and happy life.

Elephant Family is Elephant Parade’s charity partner. They are a leading charity for Asian elephants, a species which has lost 95% of its habitat and 90% of its population in the past 100 years. Supporting over 160 projects across Asia since their foundation in 2001, Elephant Family has funded projects in six of the 13 remaining elephant range states: Cambodia, India, Indonesia, Malaysia, Myanmar and Thailand. They work with world-renowned conservation experts to deliver the best possible defence against the destruction of Asian elephants, and the diverse wildlife that share their habitat. They believe in creative conservation. Hosting large-scale public art events in order to mobilise public concern is at the core of our strategy. If the endangered Asian elephant is to survive, our efforts must be both fun and fearless. To win support it’s plight must become known.